You are here: Home / Europe / Russian volunteers likely to fight in Syria alongside Assad 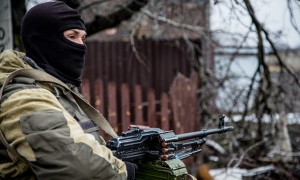 Russian volunteers who have honed their combat skills in Ukraine are likely to travel to Syria to fight alongside the forces of President Bashar al-Assad, Admiral Vladimir Komoyedov, the head of the Russian parliament’s defence committee, said on Monday.

“It is likely that groups of Russian volunteers will appear in the ranks of the Syrian army as combat participants,” Admiral Komoyedov told the Interfax-AVN news agency.

The Kremlin has said that Russia has no current plans to deploy ground troops to Syria and will confine itself to conducting air strikes to support the Syrian army instead. It has not yet offered a view on the possibility of Russian volunteers or mercenaries fighting in Syria.

Admiral Komoyedov was commenting on unconfirmed media reports that some Russian volunteers who had previously fought alongside Kremlin-backed separatists in eastern Ukraine had been spotted fighting with the Syrian army.

“What attracts volunteers apart from ideas? Of course money most likely,” said Admiral Komoyedov, a lawmaker with the Communist party.

Interfax-AVN quoted unnamed media reports as saying that such volunteers could make $50 per day.

Admiral Komoyedov spoke after Ramzan Kadyrov, the head of the Russian internal republic of Chechnya, told a Russian radio station on Friday he was ready to send Chechen forces to Syria to carry out “special operations” if President Vladimir Putin gave his blessing.

Admiral Komoyedov also raised the possibility that Russia’s Black Sea Fleet could be used to blockade parts of the Syrian coastline if necessary or to shell Islamist groups on Syrian territory, though he said there was currently no need to use naval firepower because the extremists were too far inland.