You are here: Home / Europe / Russian volunteer fighters may be headed for Syria 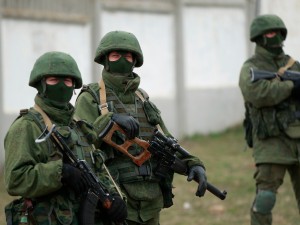 Already notorious for joining the insurgency in eastern Ukraine, Russian volunteers are now reportedly signing up to fight militants in Syria.

Their numbers are hard to verify and likely very small. But they would be in addition to the Russian Air Force, which is waging a bloody intervention in controversial support of Syrian President Bashar al-Assad, a Kremlin ally, who visited Moscow Tuesday.

Media have detailed online recruitment efforts by Russians who previously fought alongside Moscow-backed rebels in Ukraine.

But Syria’s war has nowhere near the appeal to Russian armed adventurers, analysts say, that Ukraine has.

The insurgency in eastern Ukraine gained steam with pro-Kremlin propaganda exploiting close spiritual and historical bonds between Russians and their neighbors.

Russia’s media juggernaut has tried to drum up support for the war effort in Syria, but it’s just not the same thing.

“How can you possibly explain to a fighter, on an ideological basis, why he should go fight for Assad?” says Alexander Golts, a Moscow-based military expert.

Would-be fighters don’t appear to be lining up around the block just yet.

One recruiter recently told a Russian news outlet that his group receives 30-50 applications per day, but at best, only one is “realistic.” While he estimates that hundreds of Russian volunteers are now fighting against Islamist radicals in Syria, his organization can only account for “dozens.” Other estimates are even smaller.

That’s in stark contrast to the more than 2,000 Russian nationals, mostly from the predominantly Muslim North Caucasus region, currently fighting for the Islamic State in Syria and Iraq.

Another recruiter said taking part in the conflict is too cost-prohibitive and logistically challenging, according to the Financial Times (subscription-only page). Ukraine is only a porous land border away. Joining the fight in Syria requires a long flight plus an overland route.

Still, some observers were shocked on Tuesday after reports that three Russians, believed to be volunteers, were killed in an artillery strike in western Syria. Officials quickly dismissed that claim.

The prospect of Russian volunteer ground fighters marching into the fray raises a lot of questions, including whether they would target IS or a broader range of rebel groups alongside Assad’s forces.

Russia has come under heavy criticism for its airstrikes that have largely targeted anti-Assad opposition groups instead of IS.

Its involvement in Syria has analysts discussing a new layer of proxy war, this time between Russia and the United States, on top of a slew of other global rivalries invested in the conflict.

Despite the continuing airstrikes, Russian officials have repeatedly insisted they won’t send in ground troops. In eastern Ukraine, Moscow has shrugged off questions about a troop presence by claiming that any Russian citizens fighting there were volunteers, even if they were often regular soldiers.

But Golts, the military analyst, believes the Kremlin has little to gain from taking the same route in Syria and will hold back from sanctioning any sorts of troops.

“I think the Russian leadership has enough wisdom to not play these games in Syria,” he said, “because it’s more or less clear that a military victory in Syria — or any victory at all — is impossible.”