Russian soldiers and light armoured vehicles have been fighting alongside President Bashar al-Assad’s troops according to state-run Syrian TV. Vision has been released claiming to show troops and a Russian armoured vehicle taking on Syrian rebels in Latakia. 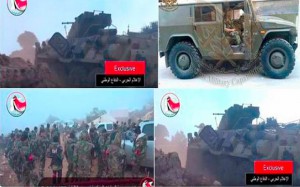 It is reportedly possible to hear Russian being spoken by the soldiers in the footage. A composite screen grab from the report is seen above.

In further indications of Russian “mission creep” in Syria, a Twitter account linked to Jabhat al-Nusra, al-Qaeda’s Syrian branch, published unconfirmed images of what appeared to be Russian planes and drones flying over Idlib.

Russian military advisers are thought to have been in Syria for months. As Breitbart News has reported, the two countries signed an accord in April agreeing to fight Islamic terrorism.

The Kremlin has never hidden its political and military support for the government in Damascus and sees it as a key Middle East ally, but if the new images are confirmed this would mark the first evidence of troops fighting on the front line.

It is possible the Russians in the state television clip could have been contractors, thereby putting some distance between themselves and the Kremlin.

An unnamed activist with the Syrian rebel group the Free Syrian Army told The Times: “The Russians have been there a long time.

“There are more Russian officials who came to Slunfeh in recent weeks. We don’t know how many but I can assure you there has been Russian reinforcement.”

President Assad said last week: “We have strong confidence in the Russians as they have proven throughout this crisis, for four years, that they are sincere and transparent in their relationship with us.”