You are here: Home / MidEastGulf / Russian T-90s will be a welcome boost to Iran’s tank corps

With Iran on track to receiving access to about $30 billion of $100 billion in assets previously frozen by sanctions, Russian journalist and military analyst Alexander Sitnikov pondered just how much of the released funds may be spent on upgrading the country’s defense capability, including its tank forces. 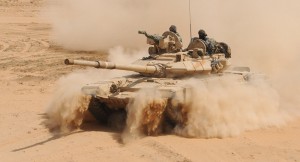 Commenting on Central Bank of Iran Governor Valiollah Seif’s recent announcement that Iran would spend much of the $30 billion in freed funds on the import of essential goods, Sitnikov, a columnist for the independent Russian newspaper Svobodnaya Pressa, suggested that it seems likely that a significant portion of the money will go toward upgrading Iran’s military potential, which according to Western experts, has declined in recent years.”This can be assumed based on the statements of Supreme Leader Ayatollah Khamenei on the country’s urgent need to strengthen the country’s military,” the analyst explained.

In accordance with the Joint Comprehensive Plan of Action (JCPOA), the international agreement on Iran’s nuclear program reached in Vienna last July, Tehran is not allowed to build or test missile systems, or to purchase advanced conventional weapons from abroad. However, Sitnikov added, “it’s important to note that the JCPOA does not deprive Iran of its right to self-defense.”

“This last formulation,” the analyst recalled, “was controversial from the beginning. US Senate Armed Services Committee Chairman John McCain was categorically against lifting the comprehensive arms embargo. Nevertheless, the supporters of only limited restrictions ultimately won on the grounds that older weapons wouldn’t threaten Iran’s neighbors, especially Saudi Arabia.”

“Iran, in total weapons procurement last year, spent $550 million,” Moses calculated. “If you look at Saudi Arabia’s defense imports, they were $7 billion last year. The UAE imported $4 billion. Oman [imported] $1 billion, which is twice as much as the Iranian total.”A “refresh” of the country’s military, according to Moses, would cost an estimated $40 billion. “And Iranian politicians and military officials are putting forth similar figures,” Sitnikov added.

In fact, the journalist suggested, “the urgent need to carry out a military modernization was the main reason Khamenei agreed to the nuclear deal. Influential Saudi political analyst Jama Khashoggi [had earlier] predicted that if Assad’s army were defeated, mobile detachments of the Islamic State (Daesh/ISIL) would invade Iran and spread chaos there. And dealing with them, the Syrian experience has shown, is only possible with the help of a mobile armored force.”

“Sure, Iran might want some Western technology, which it is openly courting for areas like increased oil recovery help for its older oil wells, but for major weapons that would be very risky,” Dean noted.”However,” Sitnikov noted, “Iran is not only motivated [to purchase Russian weaponry] by a sense of grievance toward the West. Events in Ukraine and the war in Syria have demonstrated the capabilities of Russian-made tanks, whose reputation had previously suffered serious damage during the disastrous war with Saddam Hussein.”

“On the whole,” the analyst explained, “the choice of weapons is influenced by many factors, including the fact that the T-90 was created on the basis of the legendary Cold War-era T-72 –the very same tank which was supposed to march toward the English Channel through the Fulda Gap…In the 80s, Western experts considered it a very balanced and cost-effective fighting machine, and more reliable than the T-64, which was not very well liked by Soviet tank crews, to put it mildly.”

“The history of the [T-90’s] creation, its characteristics, repairability and ease of operation are all important factors. Nevertheless, military men, including Iranian ones, understand that armor, despite its high cost and formidability, are an ‘expendable’ resource. Over 100 of the 140 M1A1 tanks supplied by the US to Iraq between 2010 and 2012 were destroyed (that is, virtually the entire force; the rest have not seen fighting). Daesh militants claimed that they were easy to destroy.”

“In other words,” Sitnikov explained, “in a real war, when the operation is poorly planned, all tanks, no matter how expensive, will burn. The US now wants $2.4 billion from the Iraqis for the next batch of 170 M1A1s, or approximately the same amount India paid for its 1,000 T-90s.”

In the final analysis, Sitnikov notes, “in a conflict, numbers matter. Out of the 700 old T-72s which Syria bought from the USSR, at least 300 are still in service, despite their obsolete protection and many years of bloody fighting. And what’s important is that in the Syrians’ view, these tanks have played a very important role. In short, Tehran knows what it’s buying.”