“How does the Rothschild family struggle to control the world?” Russian state-controlled Channel 1 (Pervy Kanal) sees no problem in asking this kind of question and illustrating it with the above image, like reported by euvsdisinfo.eu . Look at the piglets in the image below to see the reach of the Rothschild conspiracy, according to Russian public television. 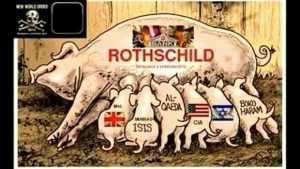 Pervy Kanal’s analytical programme tells us that the Rothschilds “have always looked at Russia as a place where they make a lot of money very quckly”. We learn that “there are rumours of ties to Mikhail Khodorkovsky”, and that French Presidential candidate Emmanuel Macron “is the family’s man”. Also media such as Liberation, The Economist, Daily Telegraph and the BBC are supposedly controlled by the Rothschilds. “Media under their control write only about the Rothschilds as hard-working people and philantropists”.

The Sunday issue of the popular show “Vremya”, which broadcast the story about the Rothschild conspiracy, is Russia’s most watched analytical news programme. The show is hosted by Valery Fadeev, who, according to Kommersant’s sources, is the most likely candidate for the important post of Secretary of the Russian Civic Chamber. Should he choose to go down the political path, Mr. Fadeev would follow in the footsteps of one of his predecessors as “Vremya” anchor, Pyotr Tolstoy, who, as we told last September in a story titled “Propagandists for Parliament”, now draws on his pro-Kremlin media experience as deputy speaker of the State Duma.

Disinformation in the form of conspiracy theories can generate a lot of clicks – a temptation Pervy Kanal couldn’t help falling for, especially when such theories support an overarching narrative of global conspiracies against Russian interests. Pervy Kanal’s new production was brought to our attention thanks to Julian Röpcke’s tweet, and is a part of a series that also uses the story about the Rockefeller family as a frame for presenting international politics.