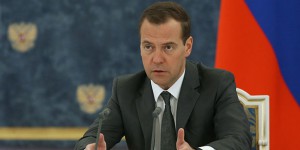 Russia’s prime minister has claimed that the legitimacy of Turkish air strikes in northern Iraq against the camps of Kurdistan Workers’ Party (PKK) is doubtful, as the country does not have Baghdad’s approval for its actions.

Dmitry Medvedev told Egypt’s al-Ahram that the United States-led coalition against Islamic State (IS) was created without the approval of the UN Security Council and it extended its activities into Syria without the consent of the country’s government.

“This arouses serious doubts about the legitimacy of such action. By the way, the recent Turkish air strikes on Iraq cannot but lead to similar issues,” Medvedev said.

Turkey has launched air raids against the PKK across the border in Iraqi Kurdistan in recent weeks, amid increased violence between government forces and PKK militants.

Iraq last week called the raids a dangerous escalation and a violation of its sovereignty.

On Wednesday the head of the Arab League criticised Turkey for conducting air strikes against the PKK, prompting Ankara’s anger.

Turkey immediately said it “rejects and condemns” the statement, which was made by Arab League Chief Nabil al-Arabi.