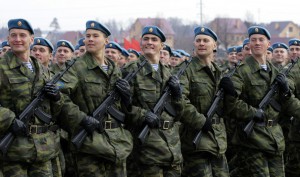 Russian lawmakers on Wednesday gave the Kremlin approval to send troops to Syria, according to Russian media reports.

President Vladimir Putin has to request a parliamentary approval for any use of Russian troops abroad, according to the Russian constitution. The last time he did so was before Russia annexed Ukraine’s Crimean Peninsula in March 2014.

The Federation Council, the upper chamber of parliament, on Wednesday cut its live web-cast broadcast in order to consider Putin’s request.