You are here: Home / MidEastGulf / Russian officials warned the Americans of where they planned to strike in Syria 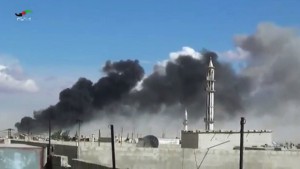 Alexander Orlov, the Russian ambassador to France, said Moscow’s intervention came only after a year of airstrikes by the U.S. and its partners failed to dislodge Islamic State extremists, and predicted that Syria could be ready for “free elections” within a year.

The Russian Defence Ministry said its warplanes on Wednesday targeted and destroyed eight positions belonging to extremists from the IS group, also known as ISIL or ISIS, in what President Vladimir Putin called a pre-emptive strike against the militants.

The ministry gave no specific locations, but Orlov said the targets were installations for Islamic State and the Nusra Front, al-Qaida’s affiliate in Syria. Orlov told France Info radio the planes were acting as air support for Syrian ground troops.

The U.S. and Russia agree on the need to fight the Islamic State but not about what to do with President Bashar Assad.

“We see that this coalition has been operating in Syria for a year, 5,000 airstrikes have been carried out, and Islamic State is still there,” Orlov said.

With American and allied airstrikes daily, and now Russian warplanes in the Syrian airspace, the war is taking on a dangerous new dimension. Orlov said Russian officials warned the Americans “via confidential channels” of where they planned to strike. He also noted a co-ordinationcentre was being set up in Baghdad that would include Syrians, Iraqis, Iranians and Russians – and any other country that wants to participate.