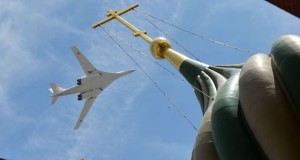 In an interview with NTV, Rogozin said the use of high-precision modern weapons by Russian forces in Syria, while showcasing the nation’s respect for troops on the front, has proven to the United States and other NATO members that the Russian defense industry and the military have entered a new phase of development.

He said that Russia’s defense purchase increased 50 percent from last year and about 96 percent of defense orders for this year will be fulfilled.

He also said that the Russian defense industry is now capable of producing certain weaponry items that used to be imported.