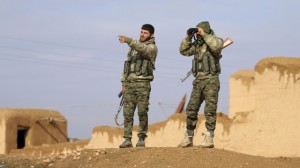 The Russian military advisors are overseeing the Syrian Army’s battle against the ISIL terrorists inside the Deir Hafer Plains of East Aleppo to accelerate the lifting of the two year long siege of the Kuweires airbase, military sources said.

The sources said that with the Russians leading the operations from the command room, the Syrian army’s Special Forces and the civilian-led “National Defense Forces” (NDF) have benefitted immensely from their guidance.

In fact, this logistical assistance from their Russian military advisors has propelled the Syrian forces to advance along the Southwestern axis of the Kuweires airbase, resulting in the recent capture of Al-Salihiyah after fierce firefights with the terrorist group.

The Russians have also deployed a number of reconnaissance drones inside the Deir Hafer Plains to capture footage of the terrorist group’s movements along the Kuweires airbase’s frontlines.

Earlier this month, military sources said that the Syrian army troops started joint massive operations to push back the ISIL terrorists from the nearby areas of Kuweires airbase in the Southern territories of the Aleppo province.