You are here: Home / Europe / Russian Mikoyan MiG-31 fighter aircraft to be replaced by new interceptor 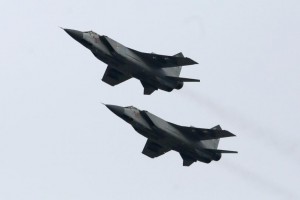 Russia will be replacing its supersonic interceptor aircraft Mikoyan MiG-31 with a new interceptor, according to reports Thursday. The MiG-31 has been out of production since 1994, prompting the replacement.

“[MiG-31] went out of production some time ago, although the functions assigned to the MiG-31 will still be required. We need a new aircraft to deal with these problems—which have, in fact, grown—based on new principles and new materials. And we understand what kind of airplane it will be: work is already underway to determine the aircraft’s design,” Russian Aircraft Corporation MiG’s Chief Executive Officer Sergei Korotkov told Russian Vedomosti newspaper, according to Sputnik News.

Korotkov did not provide any details on the new interceptor. However, when asked whether the sixth generation fighter will be a manned or unmanned aircraft, he said that Unmanned Aerial Vehicles are not likely to completely replace manned aircraft in the future.

“I think manned and unmanned combat aircraft will coexist for a long time. Today, even though the intelligence of combat systems is growing rapidly, they still need a human to make a final decision,” Korotkov reportedly told the newspaper.

In August, Russia supplied six MiG-31M fighter jets to the Syrian military as part of a $1 billion contract signed in 2007. The fulfillment of the contract was part of Russia’s support for Syrian President Bashar Assad’s fight against the Islamic State group and Syrian rebels that control large portions of country.

Although the MiG-31 was last built in 1994, the aircraft is still a capable platform when fitted with modern components and weapons systems. Russia and Kazakhstan are the only confirmed users of the aircraft.