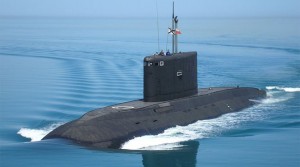 A Russian advanced kilo-class submarine has entered the Mediterranean Sea near the Syrian coast, a source in Russia’s ministry of defense told Interfax, cited by Russia Today. The Rostov-on-Don diesel-electric submarine was reportedly equipped with cruise missiles, similar to those used by Russian warships targeting the Islamic State group.

The Russian defense ministry neither confirmed nor denied the reports, according to Russia Today. In November, the same submarine also allegedly struck ISIS targets in the group’s stronghold city of Raqqa, Russia Today reported. In October, cruise missiles were fired from the Caspian Sea, targeting ISIS strongholds.

Moscow began airstrikes against ISIS in Syria on Sept. 30. The following month, ISIS fighters claimed that they downed Russia’s Metrojet flight 9268, headed from Sharm el-Sheikh resort in Egypt to St. Petersburg over the Sinai peninsula in Egypt. All 224 people on board died in the crash.

According to the Russia Today report, the Rostov-on-Don submarine is also known as ‘Improved Kilo’ under a NATO code name. The submarine is considered to be the first trade-off model in the third generation submarines of the Varshavyanka class. The submarine, one of the quietest in the world, also possesses an extended combat range. It holds a 52-man crew and can stay 45 days in water without needing to dock. The submarine is also relatively small, allowing it to steer in shallow waters.

The submarine, which weighs up to 4,000 tons and travels underwater at 20 knots an hour, can remain undetected, earning it the name of the “black hole” from NATO.