You are here: Home / FakeNews / Russian Information Warfare: the Arab Spring and Libya 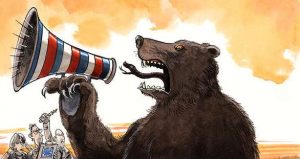 In the intervening period, strategic shocks in the Middle East and North Africa appeared to confirm Russian perceptions of a consistent Western campaign to remove regimes of which the United States disapproved – and of the use of information as the primary tool to do so, like reported by ndc.nato.int.

In early 2011, AVN President Army Gen Makhmut Gareyev pointed to “subversive information technologies of the West” being the root cause of the disorder that came to be known as the Arab Spring: “Internet networks were implanted in Egypt, Tunisia and Libya over a two-year period. It started with systematic training for communication checks, without direct calls for unlawful actions. At the right moment, a centralized order was issued across all networks for people to take to the streets.”

Comments by then-president Dmitriy Medvedev in 2011 are regularly quoted, but nonetheless indicative of Russian apprehension at the West’s eventual objectives: “Look at the situation that has unfolded in the Middle East and the Arab world. It is extremely bad. There are major difficulties ahead… We need to look the truth in the eyes. This is the kind of scenario that they were preparing for us, and now they will be trying even harder to bring it about.”

Intervention by Western powers in the resulting civil war in Libya precisely matched the pattern for “modern warfare” described by then Chief of General Staff Nikolay Makarov in published articles, including one the previous year: “use of political, economic and information pressure and subversive actions, followed by the unleashing of armed conflicts or local wars, actions that result in relatively little bloodshed” in order to achieve the aggressor’s intent.

And the disastrous longerterm consequences of destabilisation following Western interventions in Libya and elsewhere bear out Russian arguments that Western powers consistently failed to appreciate the second- and third-order effects of their actions.

Events in the Middle East and North Africa also confirmed Russian perceptions of social media as a dangerous and destabilising tool of Russia’s enemies. There had already been publicly released studies of the use of social media for political influence purposes; but even during the Arab Spring, assessments of their utility for facilitating regime change appeared to receive attention only from a narrow circle of specialists in the West.

Russian attention, however, must have been drawn to public statements by NATO regarding use of social media posts from within Libya to contribute to actionable intelligence, including targeting information.

And once again, the fact that the majority of social media platforms were foreign-owned contributed to their classification as an instrument for exploitation by Western governments: “The security and intelligence services [spetssluzhby] of the Arab states were not able to prevent the distribution of [social media] messages because they did not have access to the controlling servers of the social networks, which are located on the territory of the United States security and intelligence services.”

Social media in fact present multiple challenges to Russia, even beyond threats to the homeland itself. The experience of Russian servicemen posting to social media from eastern Ukraine – where they are officially not supposed to be – provides a clear demonstration that in the absence of strictly enforced operational security disciplines, incautious social media usage makes available valuable operational intelligence for harvesting by an adversary.

Taken together, the obvious problems presented by unrestrained and unregulated use of social media exacerbate Russian perceptions of the internet as a whole as both a tool for exercising influence abroad, and a direct vulnerability for Russia itself. Finally, virtually unrestricted freedom of expression on social media must in itself compound the impression that greater control is long overdue. In 2012, President Putin described the experience of listening to an independently-minded Russian radio station as “having diarrhoea poured over him day and night.”

Putin and those who think like him are now presented with social media disseminating widely online criticism of Russia, including prolific and highly-skilled satire exercised via Twitter. It can reasonably be assumed that their reaction to this is even more emphatic.