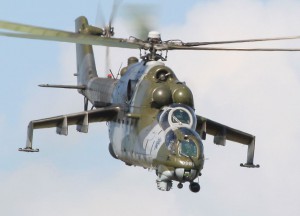 The United States has identified a small number of Russian helicopters at a Syrian airfield, U.S. officials said Wednesday, the latest addition to what Washington believes is a significant Russian military buildup in the country.

Previous reports have cited U.S. assessments as saying that Russia has sent about 200 naval infantry forces, battle tanks, artillery and other equipment to an airfield near Latakia, a stronghold of Syrian President Bashar Assad.

The Pentagon has said Russia’s movement of equipment and personnel suggest preparations to establish an air operations hub in Syria, where a U.S.-led coalition is carrying out airstrikes against Islamic State militants.

Moscow and Washington have said their enemy is Islamic State, whose fighters control part of Syria.

Russia supports Assad’s government, while the United States has said Assad’s presence is fueling the 4.5-year civil war in Syria.