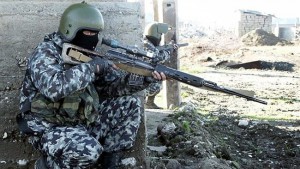 A “counter-terrorism” operation has been launched by military forces in Russia’s volatile North Caucasus region of Dagestan.

The operation was launched early in the morning on Thursday across the Suleiman-Stalsky district of Dagestan, according to an operation spokesman from the headquarters of the forces involved in the task.

The spokesman, whose name was not mentioned in Russian media reports, said that a number of military units “are working to track down gang members and their accomplices.”

The operation comes after several laboratories – used to make bombs, specifically improvised explosives – were reportedly found in the area where the mission was being carried out.

It also comes less than a week after a militant suspected of working with the ISIL Takfiri terrorist group was killed by police in Dagestan.

Russia’s National Anti-Terrorism Committee said on Saturday that the individual, identified as Suleiman Zainalobinov, was killed on Saturday.

It was reported earlier in June that a university student in Moscow, who was purportedly planning to join the ranks of ISIL, was detained on the Turkish-Syrian border region.

The ISIL Takfiri terrorists, many of whom were initially trained by the CIA in Jordan in 2012 in an attempt to destabilize the Syrian government, now control parts of Syria and neighboring Iraq. They have been engaged in crimes against humanity in the areas under their control.

The UN has recently said that 25,000 terrorists from more than 100 countries have traveled to Syria and Iraq to join such terrorist groups as ISIL and the al-Qaeda-affiliate al-Nusra Front.