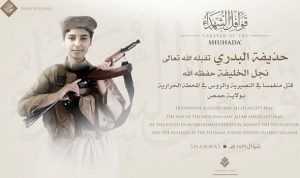 Russian forces killed the son of Islamic State (ISIS) group leader Abu Bakr al-Baghdadi in a missile attack on a Syrian cave in which he was hiding, Iraqi intelligence said Wednesday, according to AFP.

On Tuesday, ISIS’ propaganda outlet Amaq said Hudhayfah al-Badri was killed in an “operation against the Nussayriyyah and the Russians at the thermal power station in Homs”.

Nussayriyyah is the term used by ISIS for the Alawite religious minority sect of Syrian President Bashar al-Assad.

It said 11 people were killed in the attack.

“Badri wasn’t even a fighter… he was an icon that was moved from one place to another as a form of psychological propaganda for the rest of the organization,” the Falcons said on Wednesday, as quoted by AFP.

The whereabouts of his father are still unknown. Reports in February said al-Baghdadi was still alive, but that injury and poor health had forced him to relinquish control of the terror group.

Other reports in recent years have provided conflicting information about Baghdadi’s whereabouts and about whether he is even alive.

The Russian Defense Ministry said several months ago that the ISIS leader might have been among a group of ISIS members who were killed in a Russian air strike south of Raqqa, ISIS’s de facto capital in Syria.

The Syrian Observatory for Human Rights subsequently claimed it had “confirmed information” that Baghdadi has been killed, citing high-level ISIS commanders.

In September, ISIS released a recording of Baghdadi, presumably to refute reports of his death.

The Iraqi government declared victory over ISIS in December, but the military has continued regular operations targeting mostly desert areas along the Syrian border.