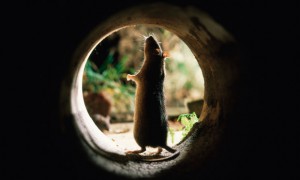 Russian scientists are reportedly training an army of tech-enhanced super rats to sniff out explosives, drugs and human remains in the global battle against terror.

Rats have already been used in mine-sniffing operations in Southeast Asia and Africa, as well as studied by the Pentagon for possible deployment at battlefield bomb searches.

But the latest rodent-infested effort finds Russian scientists equipping rats with sensory tech that could relay the presence of dangerous materials—including, say, bombs planted by kill-crazy ISIS terrorists—back to their human overlords before even the rats’ formidable noses even reacted to it.

The Daily Mail picked up a report in Kremlin-backed publication Sputnik that claims scientists at Russia’s Perception and Recognition Neuro-technologies Laboratory hope to harness rats’ raptor neurons, which could make the plucky rodents better at sniffing out bombs, remains or illegal substances than even artificial devices or dogs.

The Russian rat training, dubbed “Operation Next Generation Warfare”, faces obstacles because while it will take three months to train a rat, they typically only live for about a year. So, Sputnik reports, scientists would have to “constantly drill whole battalions of rats to provide security forces with a new type of counter-terrorist operative.”

Dr. Dmitry Medvedev, who is heading up the rat-training team, tells Sputnik: “Unlike a dog, a rat can get through the smallest crack where it seems it couldn’t go.

“This way it could find its way deep under rubble and by its brain activity one could understand if there are, for example, people who are still alive, if it’s worth clearing debris here or at another place, to rescue people more quickly.”

The microchip, which gives the rat soldier the appearance of wearing a ridiculously tiny hat, is designed to detect the rodent’s physiological reaction even before the rat has reacted to it, thus warning humans through mathematical algorithms that measure the rodent’s reactions to various smells.

But the rats still have to be trained to identify explosives and drugs—a complex task which has to be learned within the rat’s relatively short lifetime.

‘Two to three months are needed in order to teach the animal to react to one substance while the life span of a laboratory rat is only about a year, Medvedev says. “We can’t use very young rats, and the old ones have already lost their sense of smell.”