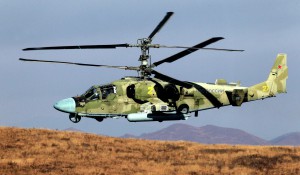 The Russian Helicopters company is ready to supply helicopter equipment necessary for the Mistral ships for Egypt, the company said Tuesday.

On Monday, Kremlin chief of staff Sergei Ivanov said Russia would supply equipment and helicopters worth over $1 billion for the Egyptian Mistral helicopter carriers.”Egypt is a long-time strategic partner for us, and if the customer is interested the Russian Helicopters will be ready to supply Mistrals with all necessary helicopter equipment,” the company’s press service told RIA Novosti.

The company has a special helicopter, the Ka-52K, specifically for Mistral vessels.

Cairo and Paris signed a contract earlier this month for the purchase of two French-made Mistral-class helicopter carriers originally built for Russia.

Egypt emerged as France’s replacement customer for the Mistrals in September 2015, after Paris and Moscow formally terminated a 2011 deal on construction and delivery of the two ships. In November 2014, France suspended the contract, claiming Moscow’s alleged participation in the Ukrainian conflict.