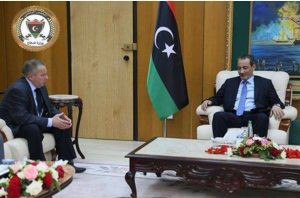 The Libyan Government’s Minister of Defence, Mahdi Al-Barghathi, received the Russian Ambassador, Ivan Molotkov, in Tripoli on Monday for a meeting.

The purpose of the meeting was to discuss how Russia can work with the UN-backed Government of National Accord (GNA)’s initiatives regarding opportunities for collaboration between the two countries in military initiatives, said the Ministry of Defence’s media centre.

“Russia is ready to expand its support on the military level for the GNA,” said the Russian Ambassador.

The Libyan Defence Ministry said Al-Barghathi will be visiting Moscow soon to continue the discussion on Russia’s involvement in Libyan military initiatives.

“Our relations are crucial, our goal today is to give life to these relations,” Haftar said before meeting with the Russian Foreign Minister.

“We hope we will eliminate terrorism with your help in the nearest future.”

Libya is struggling with political instability as two powerful political entities, the GNA in Tripoli and the Libyan parliament in Tobruk, struggle to find common ground.

Many of Haftar’s opponents claim that he is fighting to control eastern Libya and that his ultimate plan is to rule over the country.

While Haftar was in the Russian capital, Dmitry Peskov the spokesperson for the Kremlin, said, “Moscow is in touch with various Libyan representatives and contacts with Haftar take place as part of this process.”