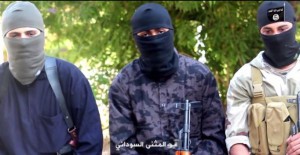 Since Syria’s brutal civil war began four and a half years ago, 4 million Syrians have fled their country in the largest migration of people since the Second World War. Recent Russian airstrikes on rebel-held territory have prompted a further exodus of people into Europe. Now, another, smaller, group is leaving Syria — bands of fighters with the Islamic State group, also known as ISIS — to seek out a firmer foothold in North Africa.

The reason ISIS fighters are leaving is twofold. While ISIS has not been the main target of Russia’s warplanes, the militants face a threat from the increased Russian and Iranian presence in the country.

“The order we have now is to destroy Daesh and push them to the Iraqi border to kill them there,” the Hezbollah commander said.

There are reports of ISIS fighters who have been so desperate to leave Syria following Russia’s aerial campaign that they have shaved off their beards in order to disguise themselves as women as they cross the border.

Fear is not the only motivator. ISIS leaders have been calling for additional fighters in Libya, a virtually lawless country that could open doors for the group accross North Africa. Flush with weapons and in the chaotic throes of civil war, Libya has unmanned border crossings make it the perfect breeding ground for militant groups, including ISIS.

Last week, ISIS claimed that 750 Tunisian ISIS fighters were heading to the Libyan coastal city of Derna, where the militant group had recently suffered setbacks, according to an audio recording of Tunisian militants.

ISIS has issued a blanket call for its fighters to make their way to Libya; this applies to both new recruits who are unable to get to Syria or Iraq, and those who have already fought with the militant group in its so-called caliphate and wish to continue the battle in their home countries.

A source with close, family ties to the militant group told IBT that Tunisian Islamic State fighters were departing Syria through Turkey before moving on to Egypt’s Sinai Peninsula, an ISIS stronghold. From there, “getting into Libya is not hard,” said Harleen Gambhir, counterterrorism analyst at the Institute for the Study of War, adding that ISIS in Libya is “in desperate need of fighters.”

Gambhir’s assessment follows Libyan ISIS leader Abul-Mughīrah al-Qahtānī’s declaration in the September issue of Dabiq, the group’s online propaganda magazine: “The Islamic State here in Libya is still young. It is in great need of every Muslim who can come, especially medical, sharia and administrative personnel, in addition to fighters.”

“ISIS has been recruiting from Tunisia, from Libya already,” Gambhir said. “But the movement of a bunch of fighters from Syria to Libya would signify a much more intense effort there.”

IBT was not able to confirm the number of ISIS fighters entering Libya from Syria, but there have been several reports of ISIS fighters leaving Syria to return to their home countries, some of them claiming to have done so of their own accord.

Some experts suggest, however, that the fighters did not make the decision to leave on their own.

“I doubt the fighters could leave Syria of their own will to pursue such a project. They would need a higher order to authorize it,” said Middle East Forum Research Fellow Aymenn Jawad al-Tamimi.

The militant group had already begun sending reinforcements to Libya two months ago, when ISIS reportedly sent some of its leaders from Iraq to do both military and social outreach training there. These leaders were likely part of ISIS’ elite military force, Jaish al-Khalifa; roughly 4,000-strong, the unit is deployed to areas with the greatest need, and can take on the tasks of combat, strategy and helping the group to expand its territory.

ISIS has been active and gaining ground in Libya since last October, when a militant group in Derna with former ties to al Qaeda pledged allegiance to ISIS “Caliph” Abu Bakr al-Baghdadi. Since then, it has suffered severe losses in Derna from local resistance but has managed to expand its hold to other areas in the war-torn country, specifically Sirte, the late dictator’s Moammar Gadhafi’s oil-rich birthplace.

The desert area on the border of Libya and Tunisia has been home to jihadist training camps for years and remains a “huge blind spot” for Tunisia’s security forces, Andrew Engel, an Africa analyst at the Washington Institute for Near East Policy recently told IBT.

As of January, at least one camp on the Tunisian side of border belonged to ISIS. Tunisian fighters would train in Libya before they went to fight in Syria. In February, the Tunisian government said it had apprehended 9,000 ISIS supporters headed for the camp, but 540 militants already had completed their training and left the country.

Tunisia is the largest source of ISIS fighters, with an estimated 8,000 people who have left to fight with militants in Iraq and Syria. “The muhājirīn [foreign fighters] come from all places … especially from Africa, the Islamic Maghrib [western North Africa], Egypt, and the Arabian Peninsula and occasionally from Western nations,” al-Qahtānī said. Roughly half of those fighters have been killed in combat.

Nearly 3,000 people have already been killed in Libya since January 2014, and hundreds more since Gadhafi’s downfall in 2011, according to Libya Body Count, a website committed to documenting the name, location and method of every violent casualty in Libya. The rise of militant groups like ISIS will only add to Libya’s chaos and ensure the conflict’s spillover into its neighbors, Egypt, Tunisia and Algeria.

An increased ISIS presence in Libya could open up the entire North African arena for the militants and is by far the most strategic position for ISIS to have in Africa. Even without this new influx of fighters, ISIS has been able to coordinate attacks from Libya in Egypt’s Sinai Peninsula and Tunisia over the past six months.

Libya is such an attractive proposition for the group because the country “contains a well of resources that cannot run dry,” al-Qahtānī told Dabiq. It is also the promise of what Libya offers to the Libyan ISIS leader as the meeting point between Europe and Africa.

“[Libya is] a gate to the African desert stretching to a number of African countries. The control of the Islamic State over this region will lead to economic breakdowns for Italy and the rest of the European states.”