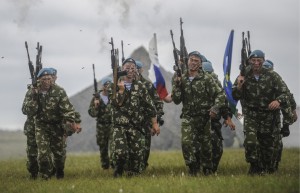 The Russian Airborne Troops are ready to assist Syria in countering terrorists, if such a task is set by Russia’s leaders, commander of the Airborne Troops Colonel-General Vladimir Shamanov told reporters on Tuesday.

“Of course we will execute the decisions set forth by the country’s leadership, if there is a task at hand,” Shamanov said, in response to a Syrian reporter’s question about the readiness of the Russian Airborne Troops to render assistance to Syria’s government in its battle against terrorism.

Shamanov noted that Russia and Syria have “long-term good relations.” “Many Syrian experts, including military, received education in the Soviet Union and in Russia,” Shamanov added.