You are here: Home / MidEastGulf / Russia warns U.S.-led coalition to stay away from Assad’s plane to Iran 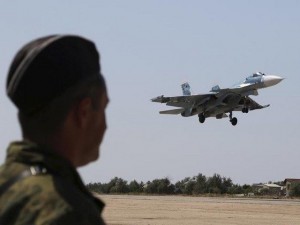 Russia has proposed deploying four warplanes to protect the aircraft carrying Bashar al-Assad during the upcoming trip to Iran and has warned the U.S.-led coalition against “getting close,” Al Jazeera reports, citing regional media outlets.

On Friday, Iran’s official news outlet Fars reported that the Syrian dictator is expected to visit Iran in late December or early January.

Citing Syrian intelligence, Al-Diyar, a Lebanese newspaper close to the Assad regime, reported Monday that the exact date of Assad’s trip would not be disclosed.

Moscow has warned the U.S.-led coalition against the Islamic State (ISIS/ISIL) not to “get close to Assad’s plane in order to avoid an aerial battle,” noted Al-Diyar.

On its way to Iran, Assad’s plane is expected to fly over Iraq, where the U.S. maintains a military presence.

The Russian military, which has been bombing targets in Syria on behalf of Assad since late September, is no stranger to flying between Syria and Iran.

Fox News reported earlier this year that Russian cargo planes have been transporting Iranian weapons from Tehran to Moscow’s airbase in Syria’s port city of Latakia despite a United Nations arms embargo imposed on Iran.

Russia formed a rival anti-ISIS alliance with Assad, Iran, and Iraq without notifying the Obama administration. Syria and Iran have been designated state sponsors of terrorism by the United States.

Although Russia claims it is primarily bombing ISIS in Syria, evidence shows it is mainly targeting anti-Assad rebels, including those who are backed by the United States.

The Assad regime is protected by Iran and Russia in additions to Iran’s terrorist proxy Hezbollah and Iraqi Shiite militias, backed by Iran.

Prior to Russia’s intervention, the Assad army and its allies suffered a spate of military defeats at the hands of Syrian rebels, including ISIS, and appeared unable to reverse the setbacks.

Agence-France Presse (AFP), quoting experts and diplomats, reported that the regime was close to accepting “a de facto partition” of Syria, induced by multiple losses and the dwindling forces available to Assad regime at the time.

However, Russia’s intervention and Iran’s assistance pumped oxygen into the Assad regime despite the Obama administration’s insistence that the Syrian dictator step down.

In October, Assad flew to Moscow to meet with Russian President Vladimir Putin, in what was alleged to be his first trip out of Syria since the civil war began there in 2011, notes Al Jazeera.

Assad’s scheduled trip to Iran would come as the Syrian army secured victories against “terrorist groups,” Fars claimed on Sunday.