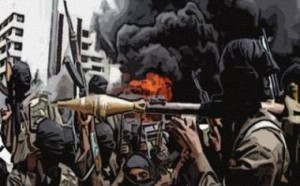 Russia is pressing for a new U.N. resolution that would prohibit and counter “terrorist propaganda” used by extremist groups to recruit young people around the world.

“We believe that resolute action by the Security Council is needed to stop the worldwide spread of propaganda of terrorism and its distorted narratives,” he said. “Those who incite to (commit) terrorism have to be sanctioned, like other supporters of terrorism.”

Churkin said the time has come for the international community to create a robust campaign, especially on the Internet and in social media, to counter the campaigns used by Islamic State group extremists, al-Qaida, the Nusra Front and their affiliates to recruit new members online.

During a world summit in September 2005, the Security Council adopted a resolution calling on all countries to take measures to “prohibit by law incitement to commit a terrorist act or acts” and to “prevent such conduct.” It also called on all nations to deny safe haven to anyone guilty of such conduct.

Churkin said that while many of the resolution’s provisions remain relevant today, “the nature of the threat has changed dramatically” and an updated resolution is needed.

The Russian draft is “aimed at countering terrorist ideology and violent extremist ideology,” he said.

It would prohibit “terrorist propaganda, including acts of public justification of terrorism intended to incite further terrorist activities,” and work to counter such propaganda, Churkin said.

He said the draft calls for a U.N. role in implementation and international cooperation, exchange of information, and assistance in tackling the issue.

Churkin said he doesn’t expect the resolution to be adopted “within days” because there are some difficult issues to resolve.