You are here: Home / West Asia / Russia to supply small arms to Afghanistan 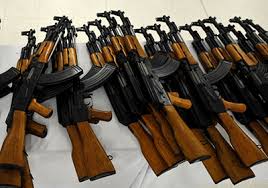 Amid increasing concerns about instability in Afghanistan pouring over into the former Soviet republics and Russia, the Russian foreign ministry says it plans to supply small arms to Kabul though it will refrain from sending other weapons.

“The delivery will be in February and for now it’s more than sufficient,” said Russia’s special envoy to Afghanistan Zamir Kabulov. He was quoted Wednesday by the Russian news agency Interfax.

Russian President Vladimir Putin has warned leaders of Central Asian nations of a possible militant incursion from Afghanistan and has called the situation “close to critical.”

Facing threats from ISIS, al-Qaida and the Taliban, Kabul has made overtures to Moscow to increase military aid to Afghanistan as the United States attempts to wind down its presence there.