You are here: Home / Europe / Russia to supply Iraqi Army with mine clearing vehicles under ‘secret’ deal 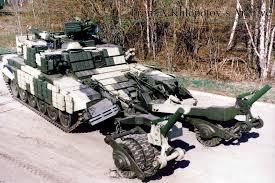 Russia is set to supply the Iraqi army with approximately 400 advanced mine clearing vehicles next week for clearing the mines planted by the Islamic State (IS) in vast areas, according to a report from FNA.

Prime Minister Haider al-Abadi has inked a ‘secret’ contract with Russia to equip the Iraqi army with the demining vehicles, the agency quotes a senior Iraqi official as saying without releasing his name.

“The armored vehicles will be used in military operations against the IS Takfiri terrorists in Northern and Western Iraq upon arrival in the country,” the source apparently said, adding that the costs for purchasing the vehicles will be paid by the Iraqi government later.

The story is illustrated with a photo of a Russian BMR-3M “Vepr” (Boar) armored clearance vehicle.

The vehicle was developed on the basis of the T-90 MBT (main battle tank); it was built to collect intelligence, overcome obstacles and perform mine clearance.

It clears passages of a width approximately equal to the inter-wheel clearance of tanks, infantry fighting vehicles and armored personnel carriers.

Attached to the front of the vehicle are two arms, each with solid steel wheels that rely on their weight to detonate mines while driving over them; this doesn’t damage the tanks due to their thickness, allowing the vehicle to continue along its path with other tanks such as the T-90 following it.