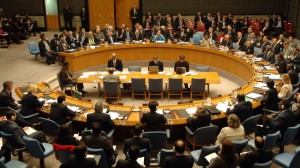 Russia will hold a special ministerial meeting at the United Nations Security Council on Sept. 30 to discuss conflicts in the Middle East and North Africa, RIA news agency cited a deputy foreign minister as saying on Wednesday.

Russia took over the UN Security Council presidency for a month as of the beginning of September.

“There are new initiatives related to our presidency of the Security Council in September,” RIA quoted Deputy Foreign Minister Gennady Gatilov as saying. “(The special meeting) .. will be devoted to discussion of the conflicts in the Middle East and North Africa in the context of a terrorism threat.”