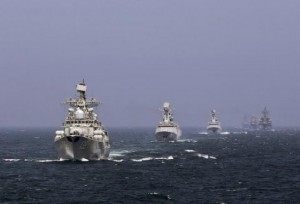 The Russian defense ministry says a guided missile cruiser will be involved in drills in the eastern Mediterranean – which could be near the Syrian coast.

Russia recently has ferried weapons, troops and supplies to an airport near the Syrian coastal city of Latakia in what the U.S. sees as preparations for setting up an air base there.

The defense ministry on Thursday announced drills “in the eastern section of the Mediterranean” later this month and in October involving a guided missile cruiser, a guided missile destroyer, a landing ship and other ships. The ministry said Russia always holds an array of military drills at this time of the year and that the government approved the Mediterranean maneuvers a year ago.