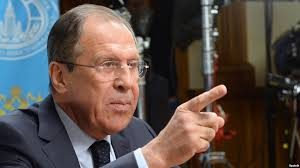 Lavrov echoed comments he made earlier in the week when he said that only Syrian troops should be stationed in rebel-held Daraa province, a region adjacent to the Israeli border that has emerged as a flashpoint in a wider standoff between the Jewish state and Iran.

Israel has warned that Iran is trying to establish a presence near the border, and last month accused the Islamic Republic of firing a salvo of rockets at Israel from there. On Wednesday evening, Defense Minister Avigdor Liberman is scheduled to travel to Moscow for talks expected to focus on Iran and its forces in Syria.

On Monday, Lavrov told reporters that only Syrian troops should be near the country’s southern border with Jordan and Israel, indicating that Russia is receptive to Jerusalem’s demands that Iranian forces should be kept far from its borders.

“Of course, the withdrawal of all non-Syrian forces must be carried out on a mutual basis, this should be a two-way street,” Lavrov said at a press conference in Moscow. “The result of this work which should continue and is continuing should be a situation when representatives of the Syrian Arab Republic’s army stand at Syria’s border with Israel.”

On Monday, the Haaretz daily reported that Russia was considering trying to keep Iranian forces and their allies from Israel’s northern border, fearing that repeated Israeli strikes may undermine Syrian President Bashar Assad’s grip on the country.

Citing Israeli security and diplomatic sources in Jerusalem, the report said that Russia had decided to work toward removing Iranian troops from the area following a heavy Israeli bombardment of Iranian military targets in Syria on May 10. The bombing raids came after Iran’s Islamic Revolutionary Guard Corps’s al-Quds Force launched 32 rockets at Israel’s forward defensive line on the Golan Heights border.

Much of the Iranian infrastructure is set up on Syrian bases and Israel has also frequently hit Syrian air defenses during strikes on Iranian targets. The preemptive effort by the Israel Defense Forces against Iran and its allies in Syria is known collectively as “Operation Chess.”

Last week, Iran appeared to reject remarks from Russia’s leader that it should pull its forces out of Syria after a political settlement is reached in the war-torn country.

“No one can force Iran to do anything,” Iran’s Foreign Ministry spokesperson Bahram Qasemi said, according to the Tasnim news website.

Russia has reportedly also recently tried to involve the United States in an agreement to bring stability to Syria, which has been ravaged by civil war for the past seven years.

Prime Minister Benjamin Netanyahu has spoken several times with Russian President Vladimir Putin and stressed that Israel will not allow Iran and Shiite militias backed by Tehran to maintain a foothold in Syria near the Israeli border. He has also said that there should be no Iranian forces anywhere in the country.

Last November, Russia reportedly made a deal with the Iranians that they would not come within five kilometers (three miles) of Israel’s border, but in practice Tehran has ignored this, and members of the Revolutionary Guard have occasionally been seen right on the border.

Israel suspects there are some 2,000 Iranian troops currently in Syria, Haaretz reported, along with almost 9,000 Shiite militia fighters from Afghanistan, Pakistan and Iraq and another 7,000 members of the Hezbollah terror group.