You are here: Home / MidEastGulf / Russia targeting own citizens who are fighting for ISIS, other jihadist groups 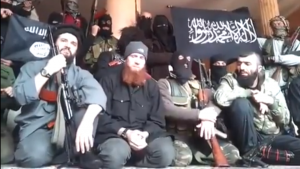 Russia is targeting its own citizens who have joined the Islamic State and other jihadist groups, a Middle East expert said.

Mairbek Vatchagaev said the ongoing air, sea and land offensive launched by Russia on Syria is not only intended to target ISIS militants and opponents of the Assad regime but also its own citizens fighting for Islamist extremist groups in Middle East countries.

He said Russia is very much concern with the growing number of North Caucasus fighters in Syria returning home to continue waging jihad, according to WND. Recently, four hunters were reportedly killed by returning militants from Syria in Dagestan, a predominantly Muslim province in Russia’s North Caucasus.

“It is unclear why Russia sat back for so long and allowed the militants in Syria to consolidate,” said Vatchagaev, of the Washington-based think-tank Jamestown Foundation. “Now, they pose a danger not only to the Russian North Caucasus, but also to areas in Central Asia adjacent to Russia.”

He claimed that people from Central Asian countries have also started to resettle in Syria “in large numbers.”

“Thus, Russia will try not only to help President (Bashar) al-Assad, but also to kill as many of its own citizens and citizens from states neighbouring Russia who are fighting in the Middle East, before they return to their homelands,” he said, according to WND.

“To date, the vast majority of Russian operations in Syria we have seen have not been against ISIL (ISIS), but against other regime opponents,” US Navy Capt. Jeff A. Davis, director of press operations at the Pentagon, told G2Bulletin.

Davis was referring to ongoing Russian airstrikes in the northern part of Syria around cities in the provinces of Homs, Hama and Idlib, which are not part of the ISIS caliphate or where ISIS fighters are located.

However, Russian warplanes have stepped up their airstrikes on ISIS positions near Palmyra, the ancient Roman city captured by ISIS, thus contradicting the Pentagon’s assessment of Russian airstrikes.

In addition, Russian fighters have reportedly bombed ISIS bunkers and training facilities in and around the self-declared ISIS caliphate capital of al-Raqqa in northeastern Syria, and are continuing their bombing campaign in the provinces of Homs, Hama and Idlib.

WND said fighters of the Free Syrian Army and other jihadist groups, many of whom are associated with Al-Qaeda, including the Khorasan Group and ISIS, are positioned in those areas.