You are here: Home / Europe / Russia taking advantage of West’s inaction to keep Assad in power 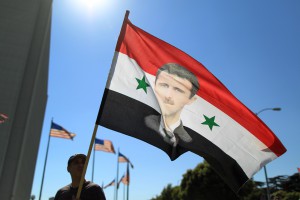 Russia’s recent military buildup in Syria has sparked concern in Western capitals as Vladimir Putin again appears to be shrewdly calculating that the West will not significantly counter his moves.

The Russian president’s annexation of Ukraine’s Crimea region last year was not strongly resisted by the Europeans or Americans, and the Kremlin likely expects even less resistance to its involvement a half-world away.

Russia’s efforts to maintain its Syrian ally and build inroads with Egypt and elsewhere represent its contest with the US for power and influence in the region.

US Secretary of State John Kerry told his Russian counterpart on Saturday the United States was deeply concerned about reports that Moscow was moving toward a major military build-up in Syria widely seen as aimed at bolstering President Bashar Assad.

US authorities have detected “worrisome preparatory steps,” including the transport of prefabricated housing units for hundreds of people to a Syrian airfield, which could signal that Russia is readying deployment of heavy military assets there, a senior US official told Reuters.

The official, speaking on condition of anonymity, said Moscow’s exact intentions remained unclear but that Kerry called Russian Foreign Minister Sergei Lavrov to leave no doubt of the US position.

However, experts told The Jerusalem Post on Sunday that it is highly unlikely that Moscow will insert its army into Syria to fight for Assad’s regime.

Nikolay Kozhanov, a non-resident fellow at Carnegie Moscow Center and a visiting fellow at Chatham House London, told the Post on Sunday that recent media speculation that Russia could get more deeply involved in Syria and even fight for Assad’s regime are exaggerated.

However, he said, his talks with people in Russia and Syria reveal that Moscow “has definitely raised the quality of equipment it is sending,” adding that Russia is “raising the stakes.”

More advanced equipment, such as armored trucks and civilian drones are being sent, but Russian society and its military “have no intention to send people on the ground,” said Kozhanov. The experience fighting radical Islamic groups in the southern Russian region of Chechnya adds to the sentiment in Russia.

What they are doing is increasing the quality of equipment and adding the advisers necessary to train Syrian forces to use it.

Kozhanov suggested that it is possible that Russian aviation and special forces are active in Syria in a supporting role.

Asked if he sees a change in Russia’s Syria policy, Kozhanov replied that he does not see so much change, as more continuity in its Syria policy, which is meant to keep the regime’s stronghold in the Mediterranean coastal province of Latakia from collapsing.

Russia has done so only when seeing no other choice, he said.

“Hence I seriously doubt whether Russian troops will be fighting in Syria,” he added.

Yet, he continued, Putin tends to use whatever means he has to undermine Western anti-Russian measures, as he did in the Ukrainian crisis.

“And what can be better than this, having the Europeans tear each other apart over the escalating refugee crisis and forgetting all about the Ukraine.”

Ariel Cohen, a senior fellow at the Atlantic Council and director of the Center for Energy, Natural Resources and Geopolitics at the Institute for Analysis of Global Security in Washington, told the Post that Russia has ambitions to be an equal partner with the US in Syria and the Middle East.

“To accomplish that, it is projecting power into Syria to protect Assad and fight ISIS, so that it becomes an ‘indispensable party’ to the final settlement.

However, this is risky, as Russian and American fighter jets may clash in the skies over Syria,” he said.

“Unfortunately for Russia, it does not recognize that Syria is dead as a nation-state. It is a geopolitical corpse,” asserted Cohen, adding that not even Russia and Iran can maintain Assad’s control over all of Syrian territory.

The capture of the Crimea in Ukraine was the first step, he continued, and the projection of naval power into the Mediterranean via Syria was the second, and now it is trying to secure naval bases in the Red Sea, Indian Ocean and Persian Gulf.

“While Europe is swamped with throngs of migrants, Russia is trying to build up a distant perimeter of defenses in the Middle East to prevent Islamic State from engaging it in the North Caucasus, including Chechnya and Dagestan.”

“This is 19th and 20th century thinking for the great geopolitical upheaval of the 21st century,” said Cohen.