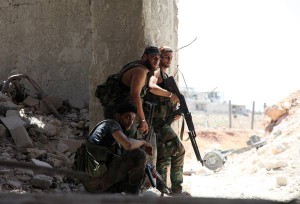 Government forces and pro-Iranian militias allied with the Syrian regime launched a land offensive in eastern Aleppo on Tuesday morning with cover from the Russian air force, sources on the ground have said.

The reports confirm earlier reports from activists on social networks. The sources said Russian air strikes are underway against the Palestinian refugee camp of Handarat in northeastern Aleppo, while the ground troops are trying to break through the lines of insurgents that control the area.