You are here: Home / MidEastGulf / Russia suspends coordination with US-led coalition after downing of Syrian jet 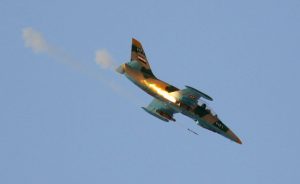 Russia’s defense ministry says it is suspending coordination with the United States in Syria over so-called “de-confliction zones” after the Americans downed a Syrian government fighter jet, like reported by aranews.net .

The United States and Russia, which has been providing an air cover for Syria’s President Bashar Assad since 2015 in his offensive against ISIS, have a standing agreement that should prevent in-the-air incidents involving US and Russia jets engaged in operations in Syria.

The Russian defense ministry said in a statement on Monday that it was suspending the deal after the US military confirmed that it downed a Syrian Air Force fighter jet on Sunday after it dropped bombs near US partner forces.

The ministry says it views the incident as Washington’s “deliberate failure to make good on its commitments” under the de-confliction deal.

On Sunday, the US-led coalition confirmed to ARA News that they shot down a Syrian regime jet that attacked positions of the US-backed Syrian Democratic Forces (SDF) in the vicinity of Tabqa town in Raqqa province.

“At approximately 4:30 p.m. Syria time, June 18, Pro-Syrian regime forces attacked the Syrian Democratic Forces-held town of Ja’Din, south of Tabqa, wounding a number of SDF fighters and driving the SDF from the town,” the coalition said.

“Coalition aircraft conducted a show of force and stopped the initial pro-regime advance toward the SDF-controlled town. Following the Pro-Syrian forces attack, the Coalition contacted its Russian counterparts by telephone via an established ‘de-confliction line’ to de-escalate the situation and stop the firing,” a spokesperson for the US-led coalition told ARA News.

“The Coalition presence in Syria addresses the imminent threat ISIS in Syria poses globally. The demonstrated hostile intent and actions of pro-regime forces toward Coalition and partner forces in Syria conducting legitimate counter-ISIS operations will not be tolerated,” the coalition said.