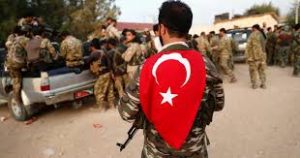 Sergey Naryshkin, Director of Russia’s Foreign Intelligence Service, has spokesn about the sources of information on the presence of militants from Syria in the hostilities in Nagorno Karabakh, RIA Novosti reports.

“We receive this data from a number of countries, from various sources and from our various partners, partner services in the Middle East,” Naryshkin said in an interview with Dmitry Kiselev, director general of the Rossiya Segodnya news agency.

He stressed that the Intelligence Service “has accurate information about the participation of militants from Syria in Karabakh.”

He further noted that Turkey’s intelligence is involved in the events in Nagorno-Karabakh.