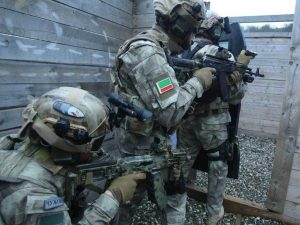 Russia said Thursday it had killed a suspected militant planning a terror attack in the North Caucasus republic of Dagestan, like reported by brecorder.com.

The National Anti-Terrorism Committee (NAK) in a statement announced that an operation to “prevent the preparation of a terrorist attack” was carried out Thursday.

“A bandit who put up armed resistance was neutralised,” it said, adding that arms, ammunition and a suicide belt were discovered on the scene.

NAK said no civilians or law enforcement were injured during the operation.

The announcement comes less than a month after Russia said its security forces swept up 19 suspected Islamists during coordinated raids across the North Caucasus and annexed Crimea.

In the 1990s Moscow fought two brutal wars against separatists in Chechnya, a North Caucasus region across the border from Dagestan.

Attacks on police have decreased in recent years in the North Caucasus, but Moscow remains in conflict with militants from across the region.

In December last year, a suicide bomber blew himself up in the North Caucasus region of Karachay-Cherkessia, injuring six police officers.

The FSB said later that month it foiled an attack planned by a Dagestan cell loyal to the Islamic State group.