You are here: Home / Europe / Russia recruits its homeless to help fight ISIS in Moscow

Moscow’s homeless are being given counter-terrorism training in a bid to shore up Russian national security, charity workers have said 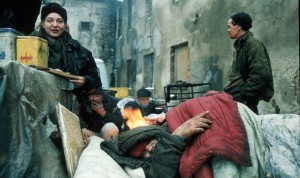 Ilya Kuskov, head of the Assistant and Patron aid group, said the lifestyle of homeless people gave them the opportunity to detect suspicious people or objects and report them to the police.

He said: “Such alertness will allow them to save not only their own lives but also those of other people.

“A similar project was carried out recently in the Siberian city of Tyumen.

“We found this idea of applying it to Moscow interesting.”

Russia has suffered a number of serious terrorist attacks over the last two decades mainly from Muslim jihadi groups but a brutal crackdown on Islamist groups made the terror threat less severe.

But the country has been on high alert since a number of deadly attacks on mainland Europe in the last 12 months.

As part of the new scheme, homeless people will be given lectures on counter terrorism activities while they stay in special winter shelters iset up in the icy Russian capital.

Instructors will explain how people can identify various explosive devices and where they can go to report strange sightings or unusual objects.

A legal specialist will be on hand during the courses to help the homeless people with more complicated terminology.

There are an estimated 16,000 homeless people in Moscow.

Earlier this year the city’s Labour and Social Protection Department held a job fair for the homeless, giving out advice and evaluating their skills through testing.