You are here: Home / MidEastGulf / Russia receives authorization to strike Daesh inside Iraq 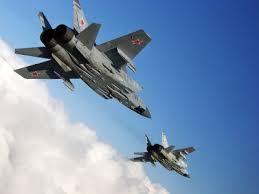 The authorization for Russia to target Daesh inside Iraq comes amid security coordination between Iraq, Russia, Iran and Syria.

Hakem al-Zamli, chief of the Iraqi parliament’s security and defense committee, told Anadolu Agency on Friday that the measure contributed to weakening Daesh by cutting off its supply routes.

Russia, an ally of the Assad regime, began carrying out airstrikes in Syria on Sept. 30. According to the Kremlin, the strikes are aimed at weakening the Daesh militant group, an avowed enemy of the regime.

Turkey and several western countries, however, accuse Russia of targeting moderate groups in Syria opposed to Assad, many of which enjoy the support of Ankara and Washington.

Iraq has been gripped by a security vacuum since June 2014 when Daesh stormed the northern city of Mosul and declared a self-styled caliphate in parts of Iraq and Syria.