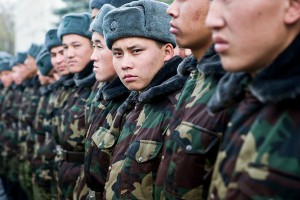 Russia is actively rearming the armed forces of Kyrgyzstan to help it counter the threat posed by Islamic State to Central Asia, Russian Defence Minister Sergei Shoigu was quoted by RIA news agency as saying on Wednesday.

Shoigu said the situation in Afghanistan was deteriorating due to the appearance of Islamic State groups there. Russia keeps a military airbase in Kant near the Kyrgyz capital Bishkek.