You are here: Home / MidEastGulf / Russia ready to launch airstrikes on ISIS targets in Iraq 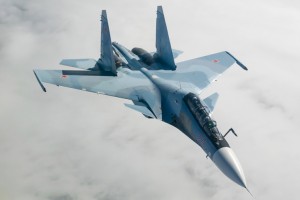 After launching airstrikes in Syria, Russia is reportedly preparing to expand its air campaign in the Middle East to include Iraq, according to WND.

Citing Middle Eastern defence sources, the online news source said Moscow may carry out possible airstrikes “as soon as next week” in an attempt to defeat terrorism and the ISIS in the entire region, including Iraq.

The sources said “Moscow is awaiting a more formal request from the Iraqi government before expanding its campaign targeting insurgents in the region,” WND reported.

At the sidelines of a UN General Assembly, Sergey Lavrov, Russia’s foreign minister, said his country has not yet been formally invited by Iraq to act against ISIS there.

“We are polite people, we don’t come if not invited,” Lavrov told reporters.

This was reportedly echoed by Ilya Rogachev, director of the Russian Foreign Ministry’s department for new challenges and threats, saying Moscow would consider airstrikes in Iraq if invited by that country.

Earlier this week, Iraqi Prime Minister Haider al-Abadi said he would support Russian intervention in his country and that he and Russian President Vladimir Putin are united in fighting against the Daesh (Arabic term for ISIS).

His statement comes after Iraq announced that it has struck a deal to share intelligence with Russia, Iran and Syria in the fight against the ISIS.

US officials believe the intelligence coordination could potentially jeopardise US security, because the country maintains its own intelligence-sharing channels with Iraq, said WND.

Reacting to the ongoing airstrikes in Syria, US President Barack Obama said he expects Russia to get stuck in a “quagmire” if it continues to act on its own and would insist on having Syrian President Bashar al-Assad stay in power.

Obama said he was “willing to work with Russian counterpart Vladimir Putin on moving Syria away from civil war, but only if that plan includes removing the Syrian President from power,” CNN reported.

“In the absence of that, Russia’s air campaign against Syria would only lead to further bloodshed for the war-torn country and bog down Moscow…Russia would get stuck in a ‘quagmire,’ because it just won’t work, and they’re going to stay there for a while.”

Obama insisted that the only solution was diplomatic, raising the possibility of a brokered deal to remove Assad’s control over Syria.