You are here: Home / MidEastGulf / Russia ready to include Kurds in Baghdad center against terrorism 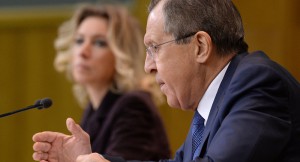 Russia is interested in the inclusion of Kurds in its work in the international Baghdad Information Center founded for the coordination in the fight against the Daesh, which is prohibited in numerous countries including the United States and Russia, Russian Foreign Minister Sergei Lavrov said.

“The international Baghdad Information Center has been operating for several months already and includes Russia, Iran, Iraq, and Syria. We are open for cooperation in any format and with other interested parties, including the Kurdish opposition and patriotic Syrian opposition. We are continuing to work closely with the anti-terrorist situation in Jordan and Egypt,” Lavrov said in an interview with Italy’s Limes monthly magazine.

The Baghdad Information Center was established by Russia, Iran, Iraq and Syria in September to coordinate their efforts in the fight against Daesh. The aim of the center is to collect, process, summarize and analyze current data about the Middle East in the context of counterterrorism measures against Daesh, distributing intelligence between the general staffs of the four countries.

The Kurds are one of the largest ethnic groups in Syria. They are putting up ground resistance to Daesh.