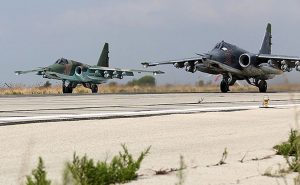 Russia has put their forces on high alert as the Ango-American axis are readying for potential military action against Bashar Al-Assad by maneuvering attack ships and fighter jets into position off the coast of Syria, like reported by eurasiareview.com.

Following yet another chemical weapons hoax, this time in Douma on Saturday, the USS Donald Cook, a guided missile destroyer is in position for any military action within Syria, while the USS Laboon, an Arleigh Burke-class destroyer which was previously deployed to Libya after the Benghazi attack, is also in close proximity as is the USS Georgia submarine.

Meanwhile, an RAF operated KC2 tanker, which is used to refuel fighter jets, is also lurking off the coast of Lebanon.

In a related story, Russia has reportedly put its armed forces on a heightened state of alert in response to increasing tensions over Syria and the ongoing fallout over the Skripal poisoning hoax perpetrated by British Intel.

“Starting to hear isolated reports from within #Russia that the nation has put her armed forces on a heightened stage of alert,” tweeted the Intel Crab account, which is an aggregator for Strategic Sentinel, a national security analysis group.

“Command and control systems have been deployed to major military installations,” a source told TASS, adding that the Russian Air Force is closely monitoring the presence of U.S. warships and submarines from the Russian naval facility in Tartus, Syria.

Meanwhile, Russia has launched massive combat drills across the country.

“Russia’s Defense Ministry said in an online statement Monday that it had launched drills stretching from Siberia to the Urals and the Volga region, as well as in Russian military bases in Tajikistan and Kyrgyzstan,” reports the Moscow Times.

According to the report, Russian soldiers will put their combat skills they learned in Syria to the test during the nationwide exercises.

President Trump commented on the tensions today when he told the press, “We are studying that situation extremely closely. We are meeting with our military and everyone else that will be making some major decisions over the next 24 to 48 hours.”