You are here: Home / Mediterranean / Russia pledges support for unity in Libya 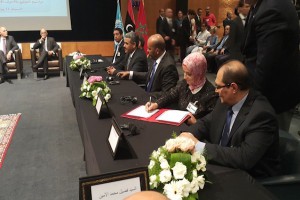 The Russian Foreign Ministry said in an official statement that it would unreservedly support progressive measures have been taken towards resolving the internal political problems and efforts directed at preserving stability and unity in Libya.
On December 17, a new an intra-Libyan political agreement was signed in the Moroccan city of Skhirat with active assistance from the United Nations. The agreement provides for the establishment of a Presidential Council, a national unity government, and other unified bodies.
While offering an appreciation for the level of civil responsibility shown by the Libyan parliamentarians, politicians, and representatives of public organisations of that country, who signed the document, the Ministry said that the agreement could be a starting point for the revival of Libyan statehood.
“We consider it important for all of Libyan society to give the new authorities its support. This would enable the newly created government agencies to deal with urgent tasks effectively, particularly in ensuring security and law and order around the country and promoting Libya’s economic recovery,” the statement reads.
It added further that “this type of government, confidently relying on the general population, on all the political forces and tribal groups, should receive recognition and assistance from the international community.”
The Russian authorities are interested in Libya’s development as a stable democratic state based on smoothly functioning government institutions, including the military and law enforcement. This would meet not only the Libyan people’s aspirations, but also the interests of the Middle East and North Africa as a region, and those of the international community.
moroccoworldnews.com