You are here: Home / MidEastGulf / Russia move into Syria because Hezbollah is exhausted 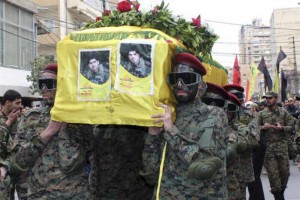 Hezbollah is ending its offensive role in Syria and will conduct no more assaults against the military forces of the Assad government. Hezbollah has lost 1,000 dead in Syria since 2013, and probably twice that wounded, out of a full-time military force of 12,000 to 15,000 fighters. Because a minority of any army are front-line troops, it is likely that more than half of Hezbollah assault troops have been killed or wounded. The total Shi’ite population of Lebanon is only about 200,000, so the available manpower pool is limited.

That may explain part of Russia’s decision to base troops in Syria: the war of attrition in that country may have exhausted Hezbollah. The often unreliable Israeli news site Debka.com reports today that Russian marines are engaged in a battle alongside Hezbollah troops east of Aleppo:

Before dawn on Thursday, Sept. 24, Russian marines went into battle for the first time since their deployment to Syria, DEBKAfile’s military and intelligence sources reveal. Russian Marine Brigade 810 fought with Syrian army and Hizballah special forces in an attack on ISIS forces at the Kweiris airbase, east of Aleppo.
This operation runs contrary to the assurances of President Vladimir Putin to Prime Minister Binyamin Netanyahu on Sept. 21 – just three days ago – that Russian forces in Syria were only there to defend Russian interests and would not engaged in combat with the Syrian army, Hizballah or Iranian troops.

Jonathan Spyer, the Director of the Rubin Center and a Fellow at the Middle East Forum, advises me by email that such reports should be viewed with skepticism.

Even if the Russian marines remain in their barracks near Latakia, Russia clearly intends to provide close air support to the Assad government, deploying “Frogfoot” ground-attack aircraft to Syria. The “Frogfoot” (SU-25) is a somewhat lighter, lighter-armored and more maneuverable equivalent of the A-10 “Warthog.” Subsonic ground-attack aircraft are vulnerable to modern air defenses, but it is unlikely that ISIS has the capability to down them. American and allied air operations have been limited in part by an extreme aversion to collateral damage. The Russians are likely to be far less squeamish.