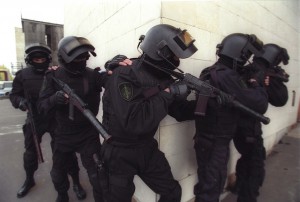 The leader of a local Islamic State cell in Nalchik, in Russia’s North Caucasian republic of Kabardino-Balkaria, was killed during a counter-terrorism operation, unidentified sources from the National Anti-Terrorism Committee told Interfax on Tuesday.

Robert Zankishiev — a 27-year-old leader of the militant Vilayat KBK organization — had been wanted by the police and was killed after special forces stormed a high-rise building in the southern part of the city.

A spokesman for the anti-terrorism committee said that Zankishiev had planned and been involved in the murder of law enforcement and officials from the regional general prosecutor’s office. One of them was killed in July in front of his 10-year-old son,.

His killing comes on the heels of two similar operations in the republic over the course of the summer. On Aug. 3, a group of six militants died following the blockade of a residential building. Six others were shot on July 23, according to Lenta.ru. No civilians were hurt during those operations.