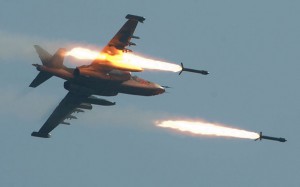 Pro-government supporters on social media as well as a Hizbollah-aligned Lebanese news station reported the strikes on parts of Jisr al-Shughour, Hama, and Jabal al-Zawiyah.

There was no mention of the attack by Syrian state media.

An opposition activist from Jisr al-Shughour confirmed the report, uploading a picture to social media purporting to show the aftermath of a missile hit in his area.

The strikes’ targets have been the centre of fierce battles between forces loyal to Bashar al-Assad and armed opposition rebels. Last March, the Army of Conquest, a grouping of Islamist factions that includes the hardline Ahrar al-Sham and al-Qaeda’s affiliate Jabhat al-Nusra, began a wide-scale campaign to take over large swathes of north-western Syria.

The offensive forced government troops to cede strategic territory to the rebels, putting the government stronghold province of Latakia within firing range of the opposition’s mortars.