You are here: Home / MidEastGulf / Russia ‘launches cruise missiles’ from Mediterranean at Isis stronghold of Raqqa in Syria 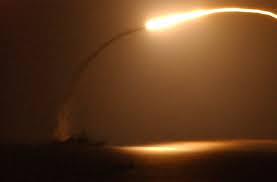 The Russian military has fired multiple cruise missiles from its ships in the Mediterranean aimed at the Isis stronghold of Raqqa, according to reports.

Vladimir Putin has pledged to escalate his military campaign in Syria after it was confirmed that a bomb brought down a Russian airliner over Sinai.

US officials were quoted by the Reuters news agency as saying Russia had launched a “significant number” of strikes in Syria using both sea-launched cruise missiles and long-range bombers.

According to reports, Russian officials gave their US counterparts notice ahead of the strikes, in a sign of closer cooperation between the two states after talks between Vladimir Putin and Barack Obama at the G20 summit.

Videos showing alleged cruise missiles flying and crashed in Syria appeared across social media on Tuesday, though their provenance could not be immediately verified.