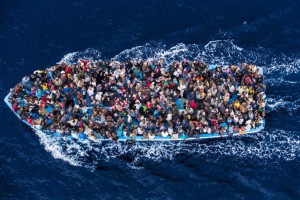 Plans for EU military strikes against boats used by human traffickers in Libya have hit political resistance from Russia.

The Financial Times said that Russia had signalled it would veto any UN resolution to authorise the destruction of ships in Libyan ports, effectively ruling out the legal authority the EU says it needs to mount such an operation.

The FT said there have been “widespread reservations — shared among some officials in the EU, Washington, the UK and at the UN” over risky strikes in Libyan ports.

Moscow is more open to discussing a UN resolution covering these more limited options. “Apprehending human traffickers and arresting these vessels is one thing,” said Vladimir Chizhov, Russia’s ambassador to the EU. “But destroying them would be going too far.”

He added that the destruction of ships without a court order and the consent of the host country would amount “to a contravention of the existing norms of international law”.

Italy has been at the forefront of the push for a mandate to use military action to stop smugglers’ boats from leaving the Libyan coast.

European diplomats fear that requesting permission for a military mission could hurt efforts to form a national unity government in Libya, making it appear it was taking the side of Libya’s internationally recognised government in Tobruk.

The Islamist-leaning alliance in the western region of Tripoli, has opposed plans for EU strikes.

Proposals for a military operation in the Mediterranean were made during a special summit of EU leaders on migration.

About 6,550 people have been rescued by Italian navy and coastguard ships since last Saturday.