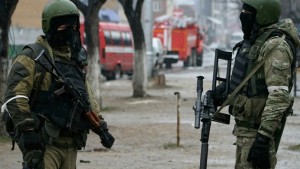 Russia’s anti-terrorism committee says police in the restive region of Dagestan have killed a militant who had taken the oath of the radical ISIS group.

Since the 1990s, Dagestan has endured clashes and attacks by Islamic militants and concerns are strong that the rise of ISIS in Iraq and Syria will spread into the heavily Muslim North Caucasus region that includes Dagestan and Chechnya.

The National Anti-Terrorism Committee said the militant, Suleiman Zainalobinov, was killed during the night after police stopped his car and he opened fire.

Saturday’s announcement of the militant’s death comes a day after authorities said a Moscow university student who was believed to be aiming to join the extremist group had been detained on the Turkish border with Syria.