You are here: Home / Europe / Russia is ready to be involved in the UN’s anti-ISIS coalition 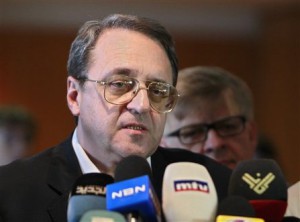 The Russian deputy foreign minister has stated that Russia is ready to be involved in the UN’s request for an anti-ISIS coalition.

“Russia is committed in multi-vectoral efforts to ensure the implementation” of President Vladimir Putin’s initiative of setting up a broad front against ISIS threats, “with the participation of key international actors and Middle Eastern countries, including Syria and Iraq,” said Mikhail Bogdanov, Deputy Russian Foreign Minister and Special Representative of the Kremlin for the Middle East and African Countries.

The dignitary responded in a written interview to AGI on the major issues affecting the region. According to Bogdanov, Moscow expects the goal to be achieved with “the contribution of the UN Security Council open session on the theme of ‘International Peacekeeping and Security: conflict resolution in the Middle East and in Northern Africa and the fight against the terror threat’. The session was proposed by Russia and is scheduled to take place in New York at the end of September, during the Russian rotating presidency of the Security Council.

“The issues included are extremely topical. In the Middle East and in Northern Africa the situation is becoming very difficult and it would not be exaggerated to say that it is critical. New crises are overtaking the old conflicts, such as the Arab-Palestinian one. The region is torn by deadly conflicts which have escalated in Syria, Iraq, Yemen and Libya, and fuel each other extensively,” added the minister. All this, warned the dignitary, has favoured “a dramatic rise in terror threats”.
“The result of the invasion of Iraq in 2003, and the subsequent attempt of external interference in the Syrian conflict, including flirtation with armed opponents, has given rise to an unprecedented threat – ISIS,” said Bogdanov. “Within this framework, there is an urgent need to make an honest and exhaustive analysis of conflicts in the Middle East and Northern Africa, with a road map for our joint action, including the anti-terrorism vector, in compliance with the United Nations Charter and the aim of building a stronger and more effective regional security architecture.

An authentic solution to the current issues is possible only with a joint approach, on the long-enduring basis of International Law, without double standards and with the support of the Security Council resolutions,” he added.

“The session on ‘International Peacekeeping and Security’ should emphasize the urgent need to implement measures for the solution and prevention of conflicts in the Middle East region and in Northern Africa, focusing on the necessary steps to be taken in order to hamper terrorist risks in the region. We rely on a high level, broad and concerned participation of all United Nations member countries,” concluded Bogdanov..