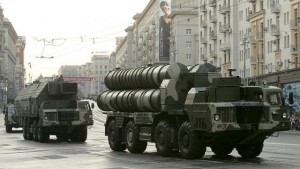 Moscow and Tehran have concluded talks on the delivery of Russian S-300 missiles to Iran which should take place “quite” soon, Deputy Foreign Minister Hossein Amir-Abdollahian said Monday.

“The negotiations on the subject have ended in success. I estimate that the S-300 delivery will take place in quite a short time,” Amir-Abdollahian said in Moscow.

“It will be done at the soonest opportunity possible,” he added after meeting his Russian counterpart Mikhail Bogdanov.

The Russian foreign ministry has not confirmed the announcement, but noted the “importance of maintaining a regular Russian-Iranian dialogue” in a statement Monday.

Tehran has previously said the missiles would be delivered by the end of the year.

The sale of the missiles was blocked in 2010 by former president Dmitri Medvedev, but in April President Vladimir Putin gave the go ahead after Tehran struck a landmark deal in Lausanne with the West over its nuclear programme.

Moscow said progress in nuclear talks between Iran and world powers meant there was no longer a need for it to prohibit exporting the surface-to-air missiles to Tehran.

The sale sparked strong condemnation from Israel and triggered concern in Washington.