You are here: Home / MidEastGulf / Russia in Syria: Arab governments see Moscow as more proactive than the West 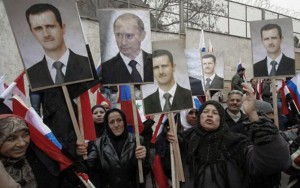 News that the Kremlin is beginning to move military assets to Syria is now a foregone conclusion. The reasons why Moscow is sending advisors and equipment to Syria in support of President Bashar al-Assad are multi-faceted. In the wake of the recent meeting between Russian President Vladimir Putin and three top Middle East leaders, and with the upcoming 70th U.N. General Assembly, the timing could not be better.

Moscow is already sending a wide array of equipment and personnel by ship to the Syrian port of Tartus. Russia has sent prefabricated housing units for hundreds of people to a Syrian airfield, as well as a portable air traffic control station. The housing will enable Moscow to use the airfield as a major hub for ferrying in military supplies to the Syrian government, or possibly as a launch pad for Russian airstrikes.

Moscow is also loading ships with equipment bound for Syria. The plan seems to be to deploy 2,000 – 3,000 Russian personnel, including advisors, instructors, logistics personnel, technical personnel, members of the aerial protection division, and pilots who will operate aircraft including over a dozen MiG-31s, according to a Gulf Cooperation Council (GCC) official.

Moscow has been sending supplies to Syria for the past four years through other means, most notably by airlift. In 2012, Russia’s then-Defense Minister Anatoly Serdyukov said Russia had “military and technical advisers” in Syria. Jordanian sources say regular flights to Damascus from Russian deliver “black items.”

Moscow also provides plenty of intelligence, surveillance and reconnaissance to the Syrian government via Russia’s military intelligence agency GRU. That the GRU is on the ground and working with Iran’s Revolutionary Guard Corps (IRGC) is undeniable.

The Kremlin sees Syria as part of Russia’s sphere of influence, and is keen on maintaining its place on the world stage and in the Middle East. In addition, the Russian Orthodox Church, which is closely tied to the Kremlin, sees involvement in Syria as necessary to protect Christians from the Islamic State of Iraq and Syria (ISIS) and other extremists.

Russia’s deployments are part of its plan for transition in Syria. For the past few months, Moscow has been the center of diplomatic activity to settle the conflict. Russia successfully negotiated the removal of chemical weapons from Syria via the 2013 “Framework for Elimination of Syrian Chemical Weapons,” in order to avoid U.S. and allied airstrikes on the Assad government and its military assets. Arab governments see Moscow as more proactive than the West when it comes to the Syrian question.

Putin’s plan in Syria is clear. By deploying Russian assets to Syria, the Kremlin plans to be the force behind upcoming events in Damascus. A few days ago in Vladivostok, Putin said Russia was looking at various options for Syria. He said Damascus should be part of a new international coalition to fight terrorism and extremism, which should take place in tandem with a political process in which Assad should play a role.

“The Syrian president… agrees with that, including holding early elections, parliamentary elections, and establishing contact with the so-called healthy opposition, bringing them into governing,” said Putin. That is a pretty strong statement of events that are about to occur in Syria where the Kremlin is dictating to Assad.

Russia is preparing for a transition in Syria. The equipment and personnel being deployed are not only to protect Alawites, but also to develop a humanitarian aid campaign. That Russian assets are setting up in Assad’s heartland in Latakia is part of Moscow guaranteeing the president and his family’s security.

In addition, the Kremlin sees that it needs to conduct state building to reverse the destructive nature of U.S. wars in the Middle East. The key question is whether the West, and specifically the United States, will go along with Putin’s plan.